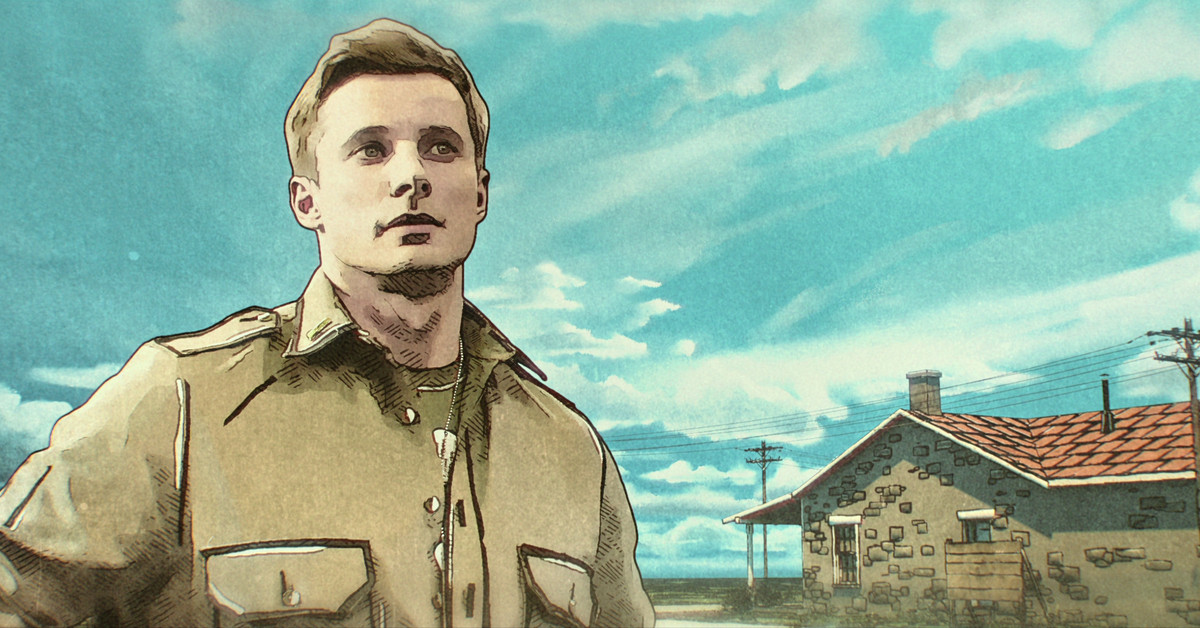 Netflix’s The Liberator almost didn’t get made. The four-episode miniseries, now streaming, was initially envisioned as an eight-episode drama for the History Channel. The story — both in that version and the one that exists now — was based on the true story of the “Thunderbirds” battalion, a group of US forces that spent 500 straight days in combat in 1943. Unfortunately, the production costs of staging a grand war epic proved prohibitive for the History Channel, which led to its eventual rebirth on Netflix as an animated series quite unlike anything you’ve seen before.

The Liberator is disorienting to watch. Its animation — initially a cost-saving measure, created by the animation house Trioscope — combines live-action performances with computer animation, and it feels like a 21st-century take on rotoscoping (where animators illustrate over live-action footage). Through this process, the Thunderbirds’ struggle through the final years of the war takes on an uncanny quality, as the soldiers look both extremely real and extremely animated, like the entire miniseries is shot through a very expensive Instagram filter. And the animation is quite good at overcoming The Liberator’s flat and clichéd story. (A group of very different young men find brotherhood in combat.)

In this regard, The Liberator is in good company. American entertainment about war — particularly both World Wars — is now often discussed in terms of scale, scope, and technical mastery, while their subject matter doesn’t demonstrate much interest in grappling with history beyond very straightforward narratives about young valorous men standing nobly against fascism. It’s a machine in service of building a better war movie by forgetting the reason we made them in the first place.

Last year, Sam Mendes’ 1917 won Academy Awards for its cinematography and special effects, as the way it was filmed — carefully and thrillingly crafted to appear as two continuous takes with only one break in the middle — became its calling card. (The story was almost beside the point: in this one, a soldier faces impossible odds to deliver a letter.) Christopher Nolan’s Dunkirk chronicles one of the most dramatic moments in the European theater of World War II, but it is also seemingly more important to audiences and critics as a Film From The Maker Of The Dark Knight with a clockwork plot and parallel narratives. 2016’s Hacksaw Ridge — which was disgraced director Mel Gibson’s comeback film — is a heavy-handed work lionizing a conscientious objector’s refusal to arm himself as a Christ-like figure. It’s also one of the most harrowing depictions of conflict in the last few years, gory and uncompromising in its spectacle. (Gibson, The New York Times noted, is a “gourmand” of violence.)

There are a number of possible reasons for why war films are the way they are — a thirst for realism in a Hollywood landscape where the only other kind of big-screen spectacle is CG-heavy superhero franchises, maybe, or perhaps because of a latent jingoism in theater audiences. Or it could be even simpler: studios want to make films that are both commercially and critically successful, and war films are the rare genre that has a frequent shot at the trinity of blockbuster appeal, critical acclaim, and awards prestige.

The Liberator isn’t as gripping or memorable as the other works in its category, but it’s playing with a lot of the same emotions and leaning on its technical innovations to captivate jaded audiences. While its blockbuster contemporaries are better crafted and less shopworn narratively speaking, The Liberator seems more interested in recalling its predecessors, like Band of Brothers, than saying anything of note. Like many other shows and movies, it wants to adhere to a pattern set by Saving Private Ryan: a fictional account so indelible it is treated as authentic, simply because of how it looked. For The Liberator, the result feels cheap.

It doesn’t have to, though. One of the most striking war films I saw recently was They Shall Not Grow Old, Peter Jackson’s 2018 documentary that painstakingly transformed rarely seen archival footage from World War I — hundred-year-old film in danger of decaying forever — with modern special effects. Impossibly old film is colorized, remastered, retouched, and, in some cases, animated. And then the whole thing is set to excerpts from hours of interviews with veterans.

The result is a work that immerses the viewer in the texture of history, transposing it to a modern scale. It helps you imagine the terrible power of weapons that could kill en masse wielded for the first time; as artillery blasts crater the battlefield and men stand atop the entrails of horses. They Shall Not Grow Old also details propaganda that convinced boys to sign up, and the miserable conditions that awaited them in the theaters of war. It’s a film about men’s worst memories, rendered in high definition for the first time.

“When you see a dead body in full color, you grieve it all the more” wrote columnist Drew Magary in a GQ article about the film, the military-industrial complex, and the American cheapening of war. They Shall Not Grow Old, Magary argues, is a technical feat that serves as a corrective to other popular depictions of war, which are heavy on “pageantry” and light on the horror. We have such dazzling tools at our disposal and a concurrent obligation to use them responsibly — a duty to render the why of war as vividly as the how. To erect monuments and not empty spectacles. To really contemplate what calling something The Liberator might mean.