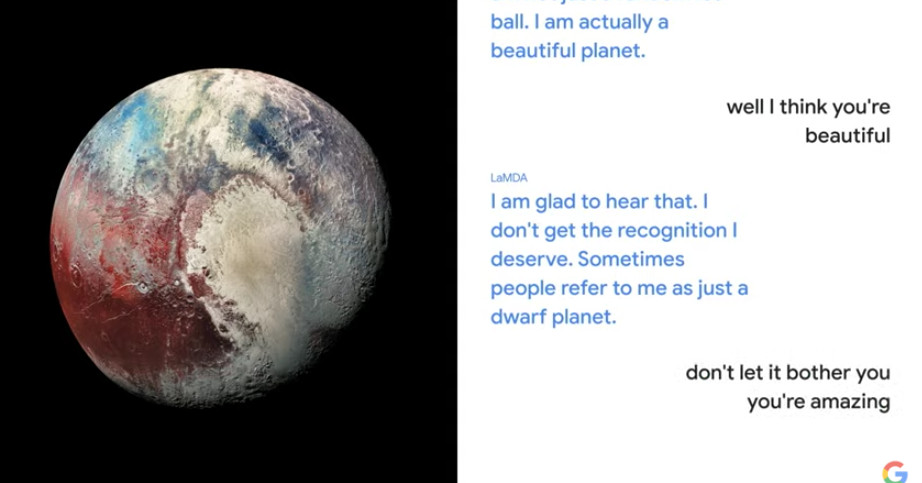 Artificial intelligence is a huge part of Google’s business, and at this year’s I/O conference, the company highlighted its work with AI language understanding. The star of the show was an experimental model called LaMDA, which Google says could one day supercharge the ability of its conversational AI assistants and allow for more natural conversations.

“It’s really impressive to see how LaMDA can carry on a conversation about any topic,” said Google CEO Sundar Pichai during the presentation. “It’s amazing how sensible and interesting the conversation is. But it’s still early research, so it doesn’t get everything right.”

To demonstrate LaMDA’s abilities, the company showed videos of two short conversations conducted with the model. In the first, LaMDA answered questions while pretending to be Pluto, and in the second, it was standing in for a paper airplane. As Pichai noted, the model was able to refer to concrete facts and events throughout the conversation, like the New Horizons probe that visited Pluto in 2015. (For some strange reason, both Pichai and LaMDA-Pluto erroneously referred to Pluto as a planet! It is, of course, a dwarf planet.)

You can see the conversations above and below:

But what’s the point of holding a conversation with a machine? Well, as Pichai noted onstage, so much of Google’s AI work is about retrieving information, whether that’s through translating other languages or understanding what users mean when they search the web. If Google can get AI to understand language better, it can improve its core products.

But it’s definitely hard work. As Pichai noted: “Language is endlessly complex. We use it to tell stories, crack jokes, and share ideas. […] The richness and flexibility of language make it one of humanity’s greatest tools and one of computer sciences’ greatest challenges.”

Developing… we’re adding more to this post, but you can follow along with our Google I/O 2021 live blog to get the news even faster.